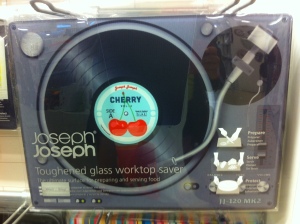 Would anyone choose to slice their vegetables and prepare their meals on a vinyl record? The designers at Joseph seem pretty convinced that many of us would. I received one of these glossy, black (plastic) vinyl-record style cutting boards as a gift recently and am still struggling to accept the item both as a physical artefact and concept. Anyone old enough to remember buying vinyl records might, like me, feel somewhat uncomfortable with the idea of brandishing a knife near such a thing. Sure, I know it’s not a real record, and I know it’s designed as a work surface saver and so theoretically is built to withstand the scratches and scrapes inevitable in the lifecycle of a chopping board. So should I display it and not use it then? Certainly, as some of its owners on Amazon proclaim, it’s best kept as a decorative item, hopefully bestowing a moderate measure of cultural capital upon its owner and perhaps even adding a little je ne sais quoi to their culinary creations. For me though it’s just another example of what Simon Reynolds has labelled ‘retromania’, a response to the trend which sees us longing for the past, in an age of hipsters, vintage chic and retro fashion. But that’s exactly the problem for me, it’s NOT a record, and it’s definitely not vintage, so how can it bestow value, even as a symbolic item? The semiotics of popular music, along with its many genres and subgenres are complex and ever-changing, but it’s clear that this item is meant to act as an eye-arresting, although hopelessly silent and static, nod to the hip associations of popular music. For me, a vinyl record is one thing and a cutting board is another; I’m afraid to say I’ll be giving this one the chop.