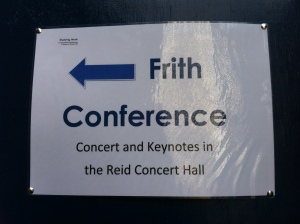 Good news!  My paper proposal for the forthcoming conference ‘Studying Music: an International Conference in Honour of Prof. Simon Frith’, to be held at the University of Edinburgh 10th-12th April 2014, has been accepted.  The paper,  provisionally titled ‘Raising stars from the underpass: an examination of Simon Frith’s music journalism in the English quality press from 1982 to 1990’ will examine Frith’s navigation of the complex relationship between sociology and criticism as evidenced through his journalistic output in the English quality press of the 1980s.  A detailed critical discourse analysis of a carefully selected sample of Frith’s music writing published in the Sunday Times and The Observer, from his inaugural rock column in the former titled Stars from the underpass (1982) until the end of the 1980s, will also shed light upon the means by which Frith sought to meet the needs of general readers without compromising his academically inflected and sociologically informed critical voice.

I hope to see you there.

In 2010 I completed my PhD thesis entitled ‘Transforming Music Criticism? An examination of changes in music journalism in the English broadsheet press from 1981 to 1991’, at Oxford Brookes University. My research entailed face to face interviews with fourteen long-standing music journalists representing all music genres from the English quality press, the construction of a database cataloguing and analysing all music-related content from a sample of quality newspapers from the period 1981 to 1991 and the detailed discourse analysis of a sample of live music reviews. My key area of expertise is music criticism and music journalism, particularly relating to popular music (including rock, pop, jazz, world music), however my broader teaching and research specialisms cover a wide range of popular music related topics, particularly those associated with popular music and identity (race, gender, nationality, subcultures) and popular music and film. Since completing my PhD I have held associate lecturing posts at Oxford Brookes University, Oxford University, Solent University, Brunel University, the University of Bristol, Bucks New University, the University of Northampton and the University of Worcester. View more posts